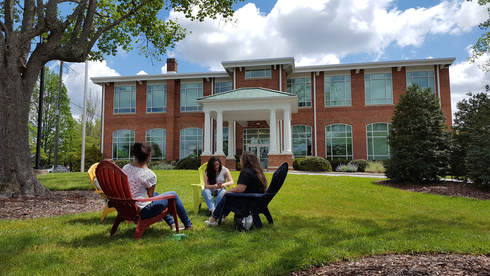 Alamance County Public Library Trends 2007-2016
The Alamance County Public Library system appears to be overall well supported locally. Funding levels have continued to increase over the past 10 years and exceeds the state average for county library per capita funding. Local funding has increased by 23% or $484,629.00 from 2007 to 2016, which is a per capita local income increase (increase per person) of $1.78 from $15.34 per person in 2007 to $17.12 per person in 2016 (the state average is $16.45 for county libraries). This increase is largely attributable to a significant growth in municipal support which increased their total contributions from $10,000 in 2013 to $229,600.00 (a 2,000% increase) while county support also has continued to remain relatively stable. Since that time, municipal support has continued to increase annually[1].

Other significant trends include a 47% increase in reference questions and a significant -84% drop in program/events being held at the library by the community and a -67% decrease in community attendance at those events.
In terms of digital access from 2010-2016, total databases have increased by 36%, technology lending (which was first reported in 2013) increased by 51%, and computers made available to both staff and the general public remained static. Computer usage, similar to state and national trends, dropped by 32% and visits to the website dropped by 9%.

An independent big data project examining all North Carolina public library statistics over a 10-year period (2006-2015) conducted by Chow and Tien (2015) found a statistically significant positive relationship between a county’s total circulation per capita and four quality-of-life factors in that county: percent of high school graduates, percent of college graduates, median household income, and total number of jobs[2].  Closer examination of Alamance County’s per capita circulation from 2010-2016 showed drops in circulation per capita and percentage of registered users annually from 2010-2015 but in 2016 circulation, % of registered population, and overall circulation per capita increased.  The data suggests that a lower percentage of Alamance County residents are using more library resources and using those resources differently. The implications from the Chow and Tien study suggest that the seminal library output that has real statistically significant impact is circulation of library items per capita and not program attendance or any other identified library output. The other facet that is not measured and remains difficult to quantify is the return-on-investment for seniors and their quality-of-life. While not measured by traditional measures collected by the US Bureau of Labor Statistics it is essential to note that seniors, their voices, and their stories of how important libraries are to them and their quality-of-life, represented a significant amount of input provided by the community through this needs assessment.

Alamance County Mirroring North Carolina Public Library Trends
When examining statewide North Carolina public library statistics over time library usage is changing. Traditional print circulation is down, computer usage is down, and traditional reference is also down. On the other hand, however, public libraries have seen significant increases in e-book and other non-print circulation, children and youth circulation, programs and program attendance, and meeting and meeting attendance.  Alamance’s public library trends over time have mirrored these statewide trends except for community meetings and meeting attendance.

Recommendations
Based on the comprehensive community and staff feedback, the following 12 recommendations are suggested: